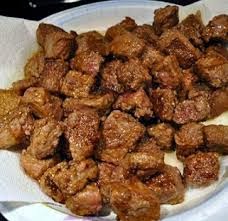 Chagga calls it Ndaf’o,get the tastiest meat cake which is baked traditionally,the only meat cake you can get in Kilimanjaro region which originates from Chagga people. This non vegetarian dish is specially designed for meat lovers, the meat can be seasoned and spiced but can also be cooked plain without any additionals depending on choice. For vegetarian there are variety of other vegetarian friendly local dishes approximately like 8 dishes and more which can be customized according to your liking..

NOTE THAT: Chagga Tribe is the number two meat lovers in Tanzania,number one being the Maasai’s, also traces shows Maasai’s and Chagga were mixed back in the days, now Chagga passion for Meat has gone a long way  from a primitive way of using it for rituals, and coronations, now Ndaf’o has became a respectable cake for important events like weddings, welcoming a new member of a family(like baby or someone who left his family for a long time).

BELIEF: Ndaf’o is also used for reconciliation, if someone has angered the other or marital problem like sleeping outside matrimonial house without consent of the partner(forgetfulness/carelessness), the wrong doer will come next morning with a Ndaf’o for making peace